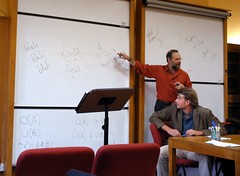 I got challenged on the extropian list, which is a fun reason to make a mini-lecture.

On 2015-10-02 17:12, William Flynn Wallace wrote:
> ​Anders says above that we have discovered universal timeless principles.​ I’d like to know what they are and who proposed them, because that’s chutzpah of the highest order. Oh boy – let’s discuss that one.

Here is one: a thing is identical to itself. (1)

Here is another one: “All human beings are born free and equal in dignity and rights.” (2)

Here is a third one: “Act only according to that maxim whereby you can, at the same time, will that it should become a universal law.” (3)

(1) was first explicitly mentioned by Plato (in Theaetetus). I think you also agree with it – things that are not identical to themselves are unlikely to even be called “things”, and without the principle very little thinking makes sense.

I am not sure whether it is chutzpah of the highest order or a very humble observation.

(2) is from the UN declaration of universal human rights. This sentence needs enormous amounts of unpacking – “free”, “equal”, “dignity”, “rights”… these words can (and are) used in very different ways. Yet I think it makes sense to say that according to a big chunk of Western philosophy this sentence is a true sentence (in the sense that ethical propositions are true), that it is universal (the truth is not contingent on when and where you are, although the applications may change), and we know historically that we have not known this principle forever. Now *why* it is true quickly branches out into different answers depending on what metaethical positions you hold, not to mention the big topic of what kind of truth moral truth actually is (if anything). The funny thing is that the universal part is way less contentious, because of the widely accepted (and rarely stated) formal ethical principle that if it is moral to P in situation X, then the location in time and space where X happens does not matter.

Chutzpah of the highest order? Totally. So is the UN.

(3) is Immanuel Kant, and he argued that any rational moral agent could through pure reason reach this principle. It is in many ways like (1) almost a consistency requirement of moral will (not action, since he doesn’t actually care about the consequences – we cannot fully control those, but we can control what we decide to do). There is a fair bit of unpacking of the wording, but unlike the UN case he defines his terms fairly carefully in the preceding text. His principle is, if he is right, the supreme principle of morality.

Note that (1) is more or less an axiom: there is no argument for why it is true, because there is little point in even trying. (3) is intended to be like a theorem in geometry: from some axioms and the laws of logic, we end up with the categorical imperative. It is just as audacious or normal as the Pythagorean theorem. (2) is a kind of compromise between different ethical systems: the Kantians would defend it based on their system, while consequentialists could make a rule utilitarian argument for why it is true, and contractualists would say it is true because the UN agrees on it. They agree on the mid-level meaning, but not on the other’s derivations. It is thick, messy and political, yet also represents fairly well what most educated people would conclude (of course, they would then show off by disagreeing loudly with each other about details, obscuring the actual agreement).

Do people who think about these things actually believe in universal principles? One fun source is David Bourget and David J. Chalmers’ survey of professional philosophers (data). 56.4% of the respondents were moral realists (there are moral facts and moral values, and that these are objective and independent of our views), 65.7% were moral cognitivists (ethical sentences can be true or false); these were correlated to 0.562. 25.9% were deontologists, which means that they would hold somewhat Kant-like views that some actions are always or never right (some of the rest of course also believe in principles, but the survey cannot tell us anything more). 71.1% thought there was a priori knowledge (things we know by virtue of being thinking beings rather than experience).

Do I believe in timeless principles? Kind of. There are statements in physics that are invariant of translations, rotations, Lorenz boosts and other transformations, and of course math remains math. Whether physics and math are “out there” or just in minds is hard to tell (I lean towards that at least physics is out there in some form), but clearly any minds that know some subset of correct, invariant physics and math can derive other correct conclusions from it. And other minds with the same information can make the same derivations and reach the same conclusions – no matter when or where. So there are knowable principles in these domains every sufficiently informed and smart mind would know. Things get iffy with values, since they might be far more linked to the entities experiencing them, but clearly we can do analyse game theory and make statements like “If agent A is trying to optimize X, agent B optimizes Y, and X and Y do not interact, then they can get more of X and Y by cooperating”. So I think we can get pretty close to universal principles in this framework, even if it turns out that they merely reside inside minds knowing about the outside world.