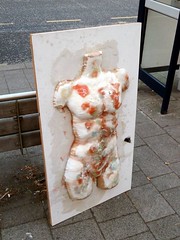 I was recently interviewed by Anna Denejkina for Vertigo, and references to the article seems to be circulating around. Given the hot button topic – transhumanism and virtual rape – I thought it might be relevant to bring out what I said in the email interview.

> How are bioethicists and philosophers coping with the ethical issues which may arise from transhumanist hacking, and what would be an outcome of hacking into the likes of full body haptic suit, a smart sex toy, e-spot implant, i.e.: would this be considered act of kidnapping, or rape, or another crime?

There is some philosophy of virtual reality and augmented reality, and a lot more about the ethics of cyberspace. The classic essay is this 1998 one, dealing with a text-based rape in the mid-90s.

My personal view is that our bodies are the interfaces between our minds and the world. The evil of rape is that it involves violating our ability to interact with the world in a sensual manner: it involves both coercion of bodies and inflicting a mental violation. So from this perspective it does not matter much if the rape happens to a biological body, or a virtual body connected via a haptic suit, or some brain implant. There might of course be lesser violations if the coercion is limited (you can easily log out) or if there is a milder violation (a hacked sex toy might infringe on privacy and ones sexual integrity, but it is not able to coerce): the key issue is that somebody is violating the body-mind interface system, and we are especially vulnerable when this involves our sexual, emotional and social sides.

Widespread use of virtual sex will no doubt produce many tricky ethical situations. (what about recording the activities and replaying them without the partner’s knowledge? what if the partner is not who I think it is? what mapping the sexual encounter onto virtual or robot bodies that look like children and animals? what about virtual sexual encounters that break the laws in one country but not another?)

Much of this will sort itself out like with any new technology: we develop norms for it, sometimes after much debate and anguish. I suspect we will become much more tolerant of many things that are currently weird and taboo. The issue ethicists may worry about is whether we would also become blasé about things that should not be accepted. I am optimistic about it: I think that people actually do react to things that are true violations.

> If such a violation was to occur, what can be done to ensure that today’s society is ready to treat this as a real criminal issue?
Criminal law tends to react slowly to new technology, and usually tries to map new crimes onto old ones (if I steal your World of Warcraft equipment I might be committing fraud rather than theft, although different jurisdictions have very different views – some even treat this as gambling debts). This is especially true for common law systems like the US and UK. In civil law systems like most of Europe laws tend to get passed when enough people convince politicians that There Ought To Be a Law Against It (sometimes unwisely).

So to sum up, look at whether people involuntarily actually suffer real psychological anguish, loss of reputations or lose control over important parts of their exoselves due to the actions of other people. If they do, then at least something immoral has happened. Whether laws, better software security, social norms or something else (virtual self defence? built-in safewords?) is the best remedy may depend on the technology and culture.

I think there is an interesting issue in what role the body plays here. As I said, the body is an interface between our minds and the world around us. It is also a nontrivial thing: it has properties and states of its own, and these affect how we function. Even if one takes a nearly cybergnostic view that we are merely minds interfacing with the world rather than a richer embodiment view this plays an important role. If I have a large, small, hard or vulnerable body, it will affect how I can act in the world – and this will undoubtedly affect how I think of myself. Our representations of ourselves are strongly tied to our bodies and the relationship between them and our environment. Our somatosensory cortex maps itself to how touch distributes itself on our skin, and our parietal cortex not only represents the body-environment geometry but seems involved in our actual sense of self.

This means that hacking the body is more serious than hacking other kinds of software or possessions. Currently it is our only way of existing in the world. Even in an advanced VR/transhuman society where people can switch bodies simply and freely, infringing on bodies has bigger repercussions than changing other software outside the mind – especially if it is subtle. The violations discussed in the article are crude, overt ones. But subtle changes to ourselves may fly under the radar of outrage, yet do harm.

Most people are no doubt more interested in the titillating combination of sex and tech – there is a 90’s cybersex vibe coming off this discussion, isn’t it? The promise of new technology to give us new things to be outraged or dream about. But the philosophical core is about the relation between the self, the other, and what actually constitutes harm – very abstract, and not truly amenable to headlines.