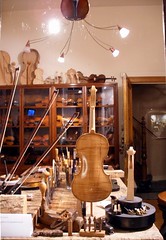 Today I read The Annihilation Score by Charles Stross during a flight. It is the sixth Laundry novel, and in many ways the weakest. But it might be the intellectually and satirically best.

The Laundry novels are a mix of horror, spy story, geekiness, and satire. This is both a reader-winning combination (transitions from one side of the mixture to another can provide intense contrast, and Stross can give readers a bit of everything) and a balancing problem: each story needs to maintain the right mixture, and the readers often have their own favourite ratios. The Annihilation Score goes further in the direction of satire, reducing the horror and geekiness fairly significantly. This no doubt makes many Laundry fans unhappy. Me too, to some extent: there is nothing more delightful than noticing wordplay based on obscure hermetica and computer science, or the distinctly unsettling implications of thinking through some of the metaphysical assumptions of the setting. However, I think Stross hit on something different in this novel: an important argument disguised as satire.

On the surface the novel suffers from bad pacing: the bulk of it is about management. Not intense action, but rather the issue of how to set up an office, from personnel management to furniture to keeping the funding body happy despite contradictory goals. There is plenty of agency-spotting, with numerous acronymical organisations criss-crossing the story with their interleaved agendas. And finally, in the last fifth, a climactic battle. Typically Laundry novels spend a lot of times establishing a mood and tension for a relatively brief finale where they get unleashed. The Annihilation Score takes this even further, but at least I did not feel much of a build-up. In fact, despite the pressure on the main character she comes across as almost a Westminster Mary Sue: she persists and succeeds at nearly everything, from turning what ought to be a social nightmare into a cozy core team, to handling unseen budgetary constraints.

Taking jabs at the absurdity, stupidity and inhumanity of bureaucracy has been a staple in the Laundry books. What makes the Annihilation Score stand out is that it actually has a fairly well thought out argument and exposition of why. The basics are familiar from the earlier novels: the iron law of bureaucracy (framed here as the emergent instrumental goal of organisations to preserve themselves), Parkinson’s law, the Snafu principle, empire building, not invented here, in-group out-group dynamics, Something Must Be Done, and so on. The novel does a sociological dive into the internal culture of the subset of bureaucracy dealing with policing. Here there exists a strong ethos about what purpose it actually has, which both serves to recruit and advance people with a compatible mindset and actually maintain some mission focus. Presumably because it would be very noticeable if the police force began too drift too far from its necessary function; compare this with how some branches of academia are kept honest by constant interaction with an unyielding real world, and others diffuse into obscure absurdity since there are only social forces constraining them. But even when a purpose has an apparently clear meaning it can get subtly (or not so subtly) twisted. This is especially true at the top, where the constraints of external practical reality are weakest.

Stross examines the case where bureaucracy recognizes it has an out-of-context problem. Something important yet unknown is intruding, and clearly something must be done to handle it. The problem is of course that following the politician’s syllogism means that whatever fast and decisive action is taken is not going to be based on good knowledge. Worse, if the organisation is centred on dealing with something Very Important like national security it will hence be (1) extremely motivated to do it, (2) discount signals from unimportant (as described by its own value system) organisations or sources. A not so subtle analogy to the Annihilation Score is government handling of many emerging technologies such as encryption. Internal expertise is lacking not just on the technology itself and its full implications, but there is also a lack of expertise in judging the consequences of different actions and expertise in recognizing this kind of expertise.

This is where I think the novel actually succeeds: it plays out a satirical scenario, but the parts are all-too-familiar. Well-meaning people work hard to ensure something agreed to be good, and the result is Moloch. The Sleeper in the Pyramid is not half as scary as the Dweller in Whitehall. Because the later is real.