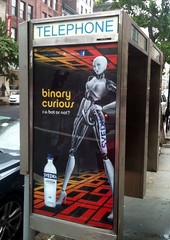 [This is what happens when I blog after two glasses of wine. Trigger warning for possibly stupid cultural criticism and misuse of Oscar Wilde.]

From robots to artificiality

On practical ethics I discuss what kind of robots we ought to campaign against. I have signed up against autonomous military robots, but I think sex robots are fine. The dividing line is that the harm done (if any) is indirect and victimless, and best handled through sociocultural means rather than legislation.

I think the campaign against sex robots has a point in that there are some pretty creepy ideas floating around in the world of current sex bots. But I also think it assumes these ideas are the only possible motivations. As I pointed out in my comments on another practical ethics post, there are likely people turned on by pure artificiality – human sexuality can be far queerer than most think.

Going off on a tangent, I am reminded of Oscar Wilde’s epigram

“The first duty in life is to be as artificial as possible. What the second duty is no one has as yet discovered.”

Being artificial is not the same thing as being an object. As noted by Barris, Wilde’s artificiality actually fits in with pluralism and liberalism. Things could be different. Yes, in the artificial world nothing is absolutely given, everything is the result of some design choices. But assuming some eternal Essence/Law/God is necessary for meaning or moral exposes one to a fruitless search for that Thing (or worse, a premature assumption one has found It, typically when looking in the mirror). Indeed, as Dorian Gray muses, “Is insincerity such a terrible thing? I think not. It is merely a method by which we can multiply our personalities.” We are not single personas with unitary identities and well defined destinies, and this is most clearly visible in our social plays.

Continuing on my Wildean binge, I encountered another epigram:

“Everything in the world is about sex except sex. Sex is about power.”

I think this cuts close to the Terminator vs. Cherry 2000 debate. Most modern theorists of gender and sex are of course power-obsessed (let’s blame Foucault). The campaign against sex robots clearly see the problem as the robots embodying and perpetuating a problematic unequal power structure. I detect a whiff of paternalism there, where women and children – rather than people – seem to be assumed to be the victims and in the need of being saved from this new technology (at least it is not going as far as some other campaigns that fully assume they are also suffering from false consciousness and must be saved from themselves, the poor things). But sometimes a cigar is just a cigar… I mean sex is sex: it is important to recognize that one of the reasons for sex robots (and indeed prostitution) is the desire for sex and the sometimes awkward social or biological constraints of experiencing it.

The problem with autonomous weapons is that power really comes out of a gun. (Must resist making a Zardoz reference…) It might be wielded arbitrarily by an autonomous system with unclear or bad orders, or it might wielded far too efficiently by an automated armed force perfectly obedient to its commanders – removing the constraint that soldiers might turn against their rulers if being aimed against their citizenry. Terminator is far more about unequal and dangerous power than sex (although I still have fond memories of seeing a naked Arnie back in 1984). The cultural critic may argue that the power games in the bedroom are more insidious and affect more of our lives than some remote gleaming gun-metal threat, but I think I’d rather have sexism than killing and automated totalitarianism. The uniforms of the killer robots are not even going to look sexy.

It is for your own good

Trying to ban sex robots is about trying to shape society into an appealing way – the goal of the campaign is to support “development of ethical technologies that reflect human principles of dignity, mutuality and freedom” and the right for everybody to have their subjectivity recognized without coercion. But while these are liberal principles when stated like this, I suspect the campaign or groups like it will have a hard time keeping out of our bedrooms. After all, they need to ensure that there is no lack of mutuality or creepy sex robots there. The liberal respect for mutuality can become a very non-liberal worship of Mutuality, embodied in requiring partners to sign consent forms, demanding trigger warnings, and treating everybody who is not responding right to its keywords as suspects of future crimes. The fact that this absolutism comes from a very well-meaning impulse to protect something fine makes it even more vicious, since any criticism is easily mistaken as an attack on the very core Dignity/Mutuality/Autonomy of humanity (and hence any means of defence are OK). And now we have all the ingredients for a nicely self-indulgent power trip.

This is why Wilde’s pluralism is healthy. Superficiality, accepting the contrived and artificial nature of our created relationships, means that we become humble in asserting their truth and value. Yes, absolute relativism is stupid and self defeating. Yes, we need to treat each other decently, but I think it is better to start from the Lockean liberalism that allows people to have independent projects rather than assume that society and its technology must be designed to embody the Good Values. Replacing “human dignity” with the word “respect” usually makes ethics clearer.

Instead of assuming we can a priori figure out how technology will change us and then select the right technology, we try and learn. We can make some predictions with reasonable accuracy, which is why trying to rein in autonomous weapons makes sense (the probability that they lead to a world of stability and peace seems remote). But predicting cultural responses to technology is not something we have any good track record of: most deliberate improvements of our culture have come from social means and institutions, not banning technology.

“The fact is, that civilisation requires slaves. The Greeks were quite right there. Unless there are slaves to do the ugly, horrible, uninteresting work, culture and contemplation become almost impossible. Human slavery is wrong, insecure, and demoralising. On mechanical slavery, on the slavery of the machine, the future of the world depends.”

3 thoughts on “Why Cherry 2000 should not be banned, Terminator should, and what this has to do with Oscar Wilde”