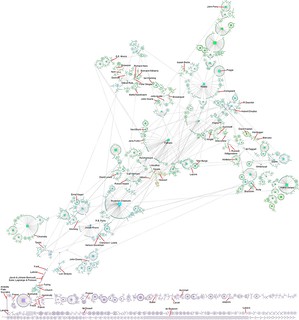 Pew Research has posted their Morality Interactive Topline Results for their spring 2013 and winter 2013-2014 survey of moral views around the world. These are national samples, so for each moral issue the survey gives how many thinks it is morally unacceptable, morally acceptable, not a moral issue or whether it depends on the situation. 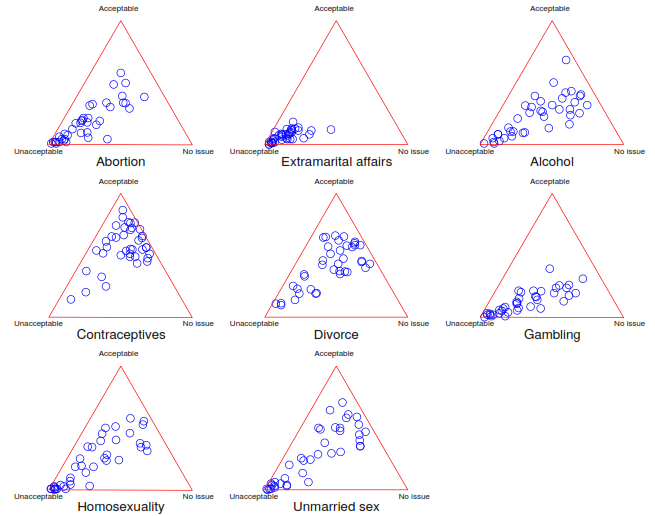 Overall, there are many countries that are morally against everything, and a tail pointing towards some balance between acceptable or morally irrelevant. 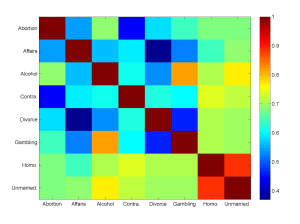 Looking at the correlations between morally unacceptable answers suggested that unmarried sex and homosexuality stands out: views there were firmly correlated but not strongly influenced by views on other things. I regard this as a “sex for fun” factor. However, it should be noted that almost everything is firmly correlated: if a country is against X, it is likely against Y too. Looking at correlations between acceptable or no issue answers did not show any clear picture. 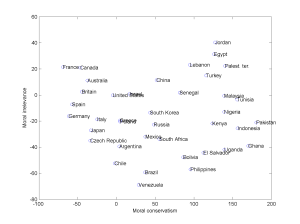 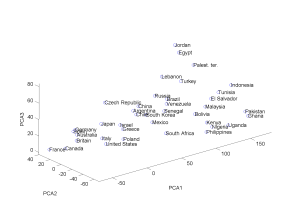 The real sledgehammer is of course principal component analysis. Running it for the whole data produces a firm conclusion: the key factor is something we could call “moral conservatism”, which explains 73% of the variance. Countries that score high find unmarried sex, homosexuality, alcohol, gambling, abortion and divorce unacceptable.

The second factor, explaining 9%, seems to denote whether things are morally acceptable or simply morally not an issue. However, it has some unexpected interaction with whether unmarried sex is unacceptable. This links to the third factor, explaining 7%, which seems to be linked to views on divorce and contraception. Looking at the 3D plot of the data, it becomes clear that for countries scoring low on the moral conservatism scale (“modern countries”) there is a negative correlation between these two factors, while for conservative countries there is a positive correlation. 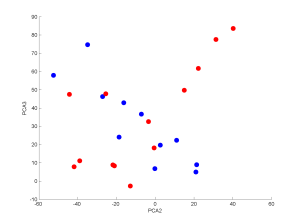 In the end, I guess the data doesn’t tell us that much truly new. A large part of the world hold traditional conservative moral views. Perhaps the most interesting part is that the things people regard as morally salient or not interacts in a complicated manner with local culture. There are also noticeable differences even within the same cultural sphere: Tunisia has very different views from Egypt on divorce.

For those interested, here is my somewhat messy Matlab code and data to generate these pictures.

Recently encountered the paper The last sunset on mainland Europe by Jorge Mira. No, despite the ominous title and my other interests it is not an estimate of when the ultimate sunset would happen (presumably either when Europe is subducted or when it gets vaporized together with Earth a few billion years hence by the ultimate sunrise). It is more along the lines of XKCD What-If’s “When will the sun finally set on the British Empire?”

Mira points out that the terminator is a great circle that changes direction throughout the year, so at different times different parts of Europe will be last. He found that these parts are Cabo de São Vicente (Portugal, Oct 19-Feb 21), Cabo da Roca (Portugal, Feb 21-Mar 24, Sep 20-Oct 19), Cabo Tourinan (Spain, Mar 24-Apr 23, Aug 18-Sep 19), a site near Aglapsvik (Norway, Apri 24-May 1, Aug 11-Aug 18), and a place in Masoy south of Havoysund(Norway, May 1-May 10, Aug 2-Aug 10).  From May 11-Aug 1 the point skips along the coast to the Arctic circle and back. Which technically might mean it moves instantly through Sweden, Finland and Russia too at the summer solstice.

I happened to be taking a sunset photo at Cabo de São Vicente when I was there Dec 27: this was the last mainland sunset for that day. 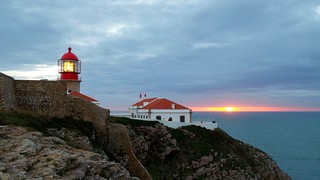