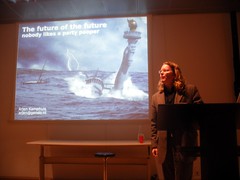 Warren Ellis’ Normal is a little story about the problem of being serious about the future.

As I often point out, most people in the futures game are basically in the entertainment industry: telling wonderful or frightening stories that allow us to feel part of a bigger sweep of history, reflect a bit, and then return to the present with the reassurance that we have some foresight. Relatively little future studies is about finding decision-relevant insights and then acting on it. It exists, but it is not the bulk of future-oriented people. Taking the future seriously might require colliding with your society as you try to tell it it is going the wrong way. Worse, the conclusions might tell you that your own values and goals are wrong.

Normal takes place at a sanatorium for mad futurists in the wilds of Oregon. The idea is that if you spend too much time thinking too seriously about the big and horrifying things in the future mental illness sets in. So when futurists have nervous breakdowns they get sent by their sponsors to Normal to recover. They are useful, smart, and dedicated people but since the problems they deal with are so strange their conditions are equally unusual. The protagonist arrives just in time to encounter a bizarre locked room mystery – exactly the worst kind of thing for a place like Normal with many smart and fragile minds – driving him to investigate what is going on.

As somebody working with the future, I think the caricatures of these futurists (or rather their ideas) are spot on. There are the urbanists, the singularitarians, the neoreactionaries, the drone spooks, and the invented professional divisions. Of course, here they are mad in a way that doesn’t allow them to function in society which softballs the views: singletons and Molochs are serious real ideas that should make your stomach lurch.

The real people I know who take the future seriously are overall pretty sane. I remember a documentary filmmaker at a recent existential risk conference mildly complaining that people where so cheerful and well-adapted: doubtless some darkness and despair would have made a far more compelling imagery than chummy academics trying to salvage the bioweapons convention. Even the people involved in developing the Mutually Assured Destruction doctrine seem to have been pretty healthy. People who go off on the deep end tend to do it not because of The Future but because of more normal psychological fault lines. Maybe we are not taking the future seriously enough, but I suspect it is more a case of an illusion of control: we know we are at least doing something.

This book convinced me that I need to seriously start working on my own book project, the “glass is half full” book. Much of our research at FHI seems to be relentlessly gloomy: existential risk, AI risk, all sorts of unsettling changes to the human condition that might slurp us down into a valueless attractor asymptoting towards the end of time. But that is only part of it: there are potential futures so bright that we do not just need sunshades, but we have problems with even managing the positive magnitude in an intellectually useful way. The reason we work on existential risk is that we (1) think there is enormous positive potential value at stake, and (2) we think actions can meaningfully improve chances. That is no pessimism, quite the opposite. I can imagine Ellis or one of his characters skeptically looking at me across the table at Normal and accusing me of solutionism and/or a manic episode. Fine. I should lay out my case in due time, with enough logos, ethos and pathos to convince them (Muhahaha!).

I think the fundamental horror at the core of Normal – and yes, I regard this more as a horror story than a techno-thriller or satire – is the belief that The Future is (1) pretty horrifying and (2) unstoppable. I think this is a great conceit for a story and a sometimes necessary intellectual tonic to consider. But it is bad advice for how to live a functioning life or actually make a saner future.