How do we apply the precautionary principle to exotic, low-probability risks?

The CUORE collaboration at the INFN Gran Sasso National Laboratory recently set a world record by cooling a cubic meter 400 kg copper vessel down to 6 milliKelvins: it was the coldest cubic meter in the universe for over 15 days. Yay! Applause! (And the rest of this post should in no way be construed as a criticism of the experiment) 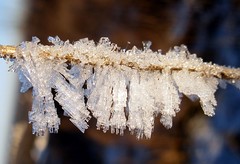 I have not been able to dig up the project documentation, but I would be astonished if there was any discussion of risk due to the experiment. After all, cooling things is rarely dangerous. We do not have any physical theories saying there could be anything risky here. No doubt there are risk assessment of liquid nitrogen or helium practical risks somewhere, but no analysis of any basic physics risks.

Compare this to the debates around the LHC, where critics at least could point to papers suggesting that strangelets, small black holes and vacuum decay were theoretically possible. Yet the LHC could argue back that particle processes like those occurring in the accelerator were already naturally occurring almost everywhere: if the LHC was risky, we ought to see plenty of explosions in the sky. Leaving aside the complications of correcting for anthropic bias, this kind of argument seems reasonably solid: if you do something that is within the envelope of what happens in the universe normally and there are no observed super-dangerous processes linked to it, then this activity is likely fine. We might wish for careful risk assessment, but given that the activity is already happening it can be viewed as just as benign as the normal activity of the universe.

However, the CUORE experiment is actually going outside of the envelope of what we think is going on in the universe. In the past, the universe has been hotter, so there would not have been any large masses at 6 milliKelvins. And with a 3 Kelvin background temperature, there would not be any natural objects this cold. (Since 1995 there have been small Bose-Einstein condensates in the hundred nanoKelvin range on Earth, but the argument is the same.)

How risky is it to generate such an outside of the envelope phenomenon? There is no evidence from the past. There is no cause for alarm given the known laws of physics. Yet this lack of evidence does not argue against risk either. Maybe there is an ice-9 like phase transition of matter below a certain temperature. Maybe it implodes into a black hole because of some macroscale quantum(gravity) effect. Maybe the alien spacegods get angry. There is an endless number of possible hypotheses that cannot be ruled out.

We might think that such “small theories” can safely be ignored. But we have some potential evidence that the universe may be riskier than it looks: the Fermi paradox, the apparent absence of alien intelligence. If we are alone, it is either because there are one or more steps in the evolution of life and intelligence that are very unlikely (the “great filter” is behind us), or there is a high likelihood that intelligence disappears without a trace (a future great filter). Now, we might freely assign our probabilities to (1) that there are aliens around, (2) that the filter is behind us, and (3) that it is ahead. However, given our ignorance we cannot rationally give zero probability to any of these possibilities, and probably not even give any of them less than 1% (since that is about the natural lowest error rate of humans on anything). Anybody saying one of them is less likely than one in a million is likely very overconfident. Yet a 1% risk of a future great filter implies a huge threat. It is a threat that not only reliably wipes out intelligent life, but also does it to civilizations aware of its potential existence!

We then have a slightly odd reason to be slightly concerned with experiments like CUORE. We know there is some probability that intelligence gets reliably wiped out. We know intelligence is likely to explore conditions not found in the natural universe. So a potential explanation could be that there is some threat in this exploration. The probability is not enormous – we might think the filter is behind us or the universe is teeming with aliens, and even if there is a future filter there are many possibilities for what it could be besides low-temperature physics – but nearly any non-infinitesimal probability multiplied by the value of our species (at least 7 billion lives) tends to lead to a too large risk. 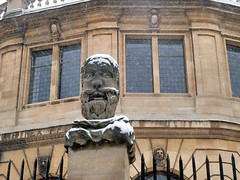 At this point the precautionary principle rears its stupid head (the ugly head is asleep). The stupid head argues that we should hence never do anything that is outside the natural envelope.

The ugly head would argue we should investigate before doing anything risky, but since in this case the empirical studying is causing the risk the head would hence advice just trying out theoretical risk scenarios – not very useful given that we are dealing with something where all potential risk comes from scenarios unconstrained by evidence!

We cannot obey the stupid head much, since most human activity is about pushing the envelope. We are trying to have more and happier people than has ever existed in the universe before. Maybe that is risky (compare to Stapledon’s Last and First Men where it turned out to be dangerous to have too much intelligence in one spot), but it is both practically hard to prevent and this kind of open-ended “let’s not do anything that has not happened in the past” seems unreasonable given that most events are new ones and generally do not lead to disasters. But the pushing of the envelope into radically new directions does carry undefinable risk. We cannot avoid that. What we can do is to discuss whether we are willing to take on such hard to pin down risk.

However, this example also shows a way precaution can break down. Nobody has, to my knowledge, worried about cooling down matter besides me. There is no concerned group urging precaution since there is no empirical nor normative reason to think there is anything wrong specifically with CUORE: we only have a general Fermi paradox-induced inchoate worry. Yet proper precaution requires considering weak possibilities. I suspect that most future big new disasters will turn out to have avoided precautionary considerations just because there was no obvious reason to invoke the principle.

Many people are scared more by uncertainty than actual risk. But we cannot escape it. Especially if we want to reduce existential risk, which tends to be more uncertain than most. This little essay is about some of the really tricky limits to what we can know about new risks. We should expect them to be unexpected. And we should expect that the standard decision methods will not behave sensibly.

As for the CUORE team, I wish them the best of luck to find neutrinoless double beta decay. But they should keep an eye open for weird anomalies too – they have a chance to peek outside the envelope of the natural in a well controlled setting, and that is valuable.

3 thoughts on “Cool risks outside the envelope of nature”