Charles Wohlforth and Amanda R. Hendrix want us to colonize Titan. The essay irritated me in an interesting manner.

Full disclosure: they interviewed me while they were writing their book Beyond Earth: Our Path to a New Home in the Planets, which I have not read yet, and I will only be basing the following on the SciAm essay. It is not really about settling Titan either, but something that bothers me with a lot of scenario-making.

A weak case for Titan and against Luna and Mars

A lot of course hinges on the assumptions:

We expect human nature to stay the same. Human beings of the future will have the same drives and needs we have now. Practically speaking, their home must have abundant energy, livable temperatures and protection from the rigors of space, including cosmic radiation, which new research suggests is unavoidably dangerous for biological beings like us.

I am not that confident in that we will remain biological or vulnerable to radiation. But even if we decide to accept the assumptions, the case against the Moon and Mars is odd:

Practically, a Moon or Mars settlement would have to be built underground to be safe from this radiation.Underground shelter is hard to build and not flexible or easy to expand. Settlers would need enormous excavations for room to supply all their needs for food, manufacturing and daily life.

So making underground shelters is much harder than settling Titan, where buildings need to be isolated against a -179 C atmosphere and ice ground full with complex and quite likely toxic hydrocarbons. They suggest that there is no point in going to the moon to live in an underground shelter when you can do it on Earth, which is not too unreasonable – but is there a point in going to live inside an insulated environment on Titan either? The actual motivations would likely be less of a desire for outdoor activities and more scientific exploration, reducing existential risk, and maybe industrialization.

Also, while making underground shelters in space may be hard, it does not look like an insurmountable problem. The whole concern is a bit like saying submarines are not practical because the cold of the depths of the ocean will give the crew hypothermia – true, unless you add heating.

I think this is similar to Schneier’s law:

Anyone, from the most clueless amateur to the best cryptographer, can create an algorithm that he himself can’t break.

It is not hard to find a major problem with a possible plan that you cannot see a reasonable way around. That doesn’t mean there isn’t one. 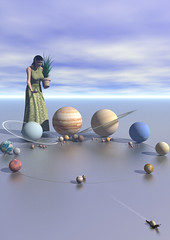 Maybe Wohlforth and Hendrix spent a lot of time thinking about lunar excavation issues and consistent motivations for settlements to reach a really solid conclusion, but I suspect that they came to the conclusion relatively lightly. It produces an interesting scenario: Titan is not the standard target when we discuss where humanity ought to go, and it is an awesome environment.

Similarly the “humans will be humans” scenario assumptions were presumably chosen not after a careful analysis of relative likelihood of biological and postbiological futures, but just because it is similar to the past and makes an interesting scenario. Plus human readers like reading about humans rather than robots. All together it makes for a good book.

Clearly I have different priors compared to them on the ease and rationality of Lunar/Martian excavation and postbiology. Or even giving us D. radiodurans genes.

In The Age of Em Robin Hanson argues that if we get the brain emulation scenario space settlement will be delayed until things get really weird: while postbiological astronauts are very adaptable, so much of the mainstream of civilization will be turning inward towards a few dense centers (for economics and communications reasons). Eventually resource demand, curiosity or just whatever comes after the Age of Ems may lead to settling the solar system. But that process will be pretty different even if it is done by mentally human-like beings that do need energy and protection. Their ideal environments would be energy-gradient rich, with short communications lags: Mercury, slowly getting disassembled into a hot Dyson shell, might be ideal. So here the story will be no settlement, and then wildly exotic settlement that doesn’t care much about the scenery.

But even with biological humans we can imagine radically different space settlement scenarios, such as the Gerhard O’Neill scenario where planetary surfaces are largely sidestepped for asteroids and space habitats. This is Jeff Bezo’s vision rather than Elon Musk’s and Wohlforth/Hendrix’s. It also doesn’t tell the same kind of story: here our new home is not in the planets but between them.

Beyond the good story

Sometimes we settle for scenarios because they tell a good story. Sometimes because they are amenable to study among other, much less analyzable possibilities. But ideally we should aim at scenarios that inform us in a useful way about options and pathways we have.

That includes making assumptions wide enough to cover relevant options, even the less glamorous or tractable ones.

That requires assuming future people will be just as capable (or more) at solving problems: just because I can’t see a solution to X doesn’t mean it is not trivially solved in the future.

(Maybe we could call it the “Manure Principle” after the canonical example of horse manure being seen as a insoluble urban planning problem at the previous turn of century and then neatly getting resolved by unpredicted trams and cars – and just like Schneier’s law and Stigler’s law the reality is of course more complex than the story.)

In standard scenario literature there are often admonitions not just to select a “best case scenario”, “worst case scenario” and “business as usual scenario” – scenario planning comes into its own when you see nontrivial, mixed value possibilities. In particular, we want decision-relevant scenarios that make us change what we will do when we hear about them (rather than good stories, which entertain but do not change our actions). But scenarios on their own do not tell us how to make these decisions: they need to be built from our rationality and decision theory applied to their contents. Easy scenarios make it trivial to choose (cake or death?), but those choices would have been obvious even without the scenarios: no forethought needed except to bring up the question. Complex scenarios force us to think in new ways about relevant trade-offs.

The likelihood of complex scenarios is of course lower than simple scenarios (the conjunction fallacy makes us believe much more in rich stories). But if they are seen as tools for developing decisions rather than information about the future, then their individual probability is less of an issue.

In the end, good stories are lovely and worth having, but for thinking and deciding carefully we should not settle for just good stories or the scenarios that feel neat.